LONDON, United Kingdom—October 16, 2018 – Huawei Consumer Business Group (BG) today unveiled the HUAWEI Mate 20 Series, one of the most highly anticipated smartphone series of the year. Representing a momentous milestone in the history of the HUAWEI Mate Series, the HUAWEI Mate 20 Series embodies the pinnacle of innovation. Designed with the industry’s most powerful and sophisticated process technology, the latest Huawei flagship devices set a new bar by which all 2018 smartphones will be measured. 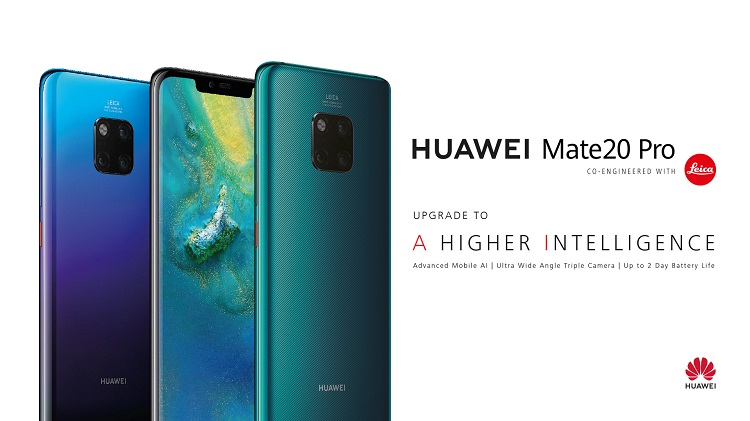 The HUAWEI Mate 20 Series is powered by Huawei’s densest and highest performing system on chip (SoC) to date—the Kirin 980. Manufactured with the advanced 7nm process incorporating the powerful Cortex-A76-based CPU and Mali-G76 GPU, the SoC offers improved performance and an unprecedented smooth user experience. The new 40W HUAWEI SuperCharge, 15W HUAWEI Wireless Quick Charge and large batteries work in tandem to provide users with the best battery life. The Matrix Camera System includes Leica Ultra Wide Angle Lens that lets users not only see wider, but also closer with its new macro distance capability. The Hyper Optical Pattern on the glass back plays with light and shadows, producing an iridescent optical effect that is immediately captivating. The Matrix Camera System adopts the iconic Four-Point Design that exudes personality, giving the device a unique visual identity that is recognizable even at a distance. The HUAWEI Mate 20 Series is shipped with the highly customized Android P-based EMUI 9 operating system, on which consumers can enjoy all productivity and entertainment features easily and conveniently with a few simple taps and swipes.

Following the Canadian success of Huawei’s P20 Pro - featuring the world’s first Leica Triple Camera - Huawei Canada will soon launch the company’s flagship product – the HUAWEI Mate 20 Pro – the ultimate performance device for Canada’s most demanding and discerning consumers. Offering a suite of features not found anywhere else, the HUAWEI Mate 20 Pro sets a new standard in the smartphone category.

“Smartphones are an important entrance to the digital world. The HUAWEI Mate 20 Series is designed to be the best ‘mate’ of consumers, accompanying and empowering them to enjoy a richer, more fulfilled life with their higher intelligence, unparalleled battery lives and powerful camera performance,” said Richard Yu, CEO of Huawei Consumer BG.

Key Features of the HUAWEI Mate 20 Pro include:

HUAWEI Mate 20 Pro is the world’s first smartphone to support the 4.5G LTE Cat. 21 standard, allowing consumers to experience download speeds of up to 1.4Gbps. It also supports the world’s fastest Wi-Fi connection speeds--2GB footage requires only 10 seconds to download.

The HUAWEI Mate 20 Pro takes the best smartphone camera on the market – HUAWEI P20 Pro - and adds to it a Leica Ultra Wide Angle Lens to give users the option of capturing with a wide perspective, enabling everyday users to elevate their video clips into cinematic masterpieces.

Equipped with a 40MP main camera, a 20MP ultra wide-angle camera, and an 8MP telephoto camera, the trio of lenses supports a wide range of focal lengths (equivalent to the performance of a 16-270mm zoom lens), enabling it to mimic the results from professional cameras.

The new camera system also supports macro photography, which produces crisp images of objects that are placed as close as 2.5cm from the lens. The added ultra-wide angle lens and macro support completes the feature set of the Leica Triple Camera, elevating it to a truly all-round camera that is ready to capture any and all action.

An AI Cinema Mode is available on HUAWEI Mate 20 Pro. Users can use this mode to tweak the hue, saturation and brightness of their video clips to effortlessly change the mood of the footage. It comes with a range of presets, including Vintage, Fresh, Suspense and Background Blur. The feature also supports selective desaturation. Using AI, the HUAWEI Mate 20 Pro can isolate human subjects and desaturate the colours around them to dramatically highlight the person. AI Spotlight Reel identifies clips with a shared theme and auto-generates a 10-second montage, made entirely of highlights.

The HUAWEI Mate 20 Pro supports native 21:9 photo and video capturing. Compared to the regular 16:9 ratio, the 21:9 aspect ratio has a dramatically wider, exaggerated perspective, which can be leveraged to produce artistic and cinematic effects.

Designed to be the ultimate productivity enabler, the HUAWEI Mate 20 Pro features a 4200mAh battery that will power users throughout their entire day.

The HUAWEI SuperCharge supports up to 40W extreme fast charging. For context, when a HUAWEI Mate 20 Pro is plugged to a 40W HUAWEI SuperCharge adaptor, it can gain approximately 70 percent charge (equivalent to 2940mAh) from a 30-minute charging session. The fast-charging technology is certified by TÜV Rheinland for meeting its stringent safety standards.

Another breakthrough technology comes in the form of HUAWEI Mate 20 Pro’s Wireless Reverse Charging, which enables users to take maximum advantage of the large batteries inside the device to benefit other devices.

The HUAWEI Mate 20 Pro features a snappy In-Screen Fingerprint Sensor that works exactly how you would expect – place your finger on the on-screen prompt for authentication. Once it’s done its job, the prompt disappears into the background, as quickly as you lift your finger.

The HUAWEI Mate 20 Pro comes with EMUI 9.0, a smart operating system based on Android P. Through AI self-learning algorithms, an integrated and granular resource allocation system, and a highly optimized Android environment, EMUI 9.0 enables Huawei to continue to deliver on its “Born Fast, Stays Fast” promise.

EMUI 9.0 incorporates a unified, ergonomic design and a streamlined settings menu. The new gesture navigation support allows users to effortlessly interact with their devices using just taps and swipes. It also introduces new AI features that enable the HUAWEI Mate 20 Pro to perform or enhance a range of tasks including object identification.

The grace of natural elements is captured in the design of the HUAWEI Mate 20 Pro. The chassis is curved on all eight sides—a marvel to behold, and a pleasure to hold in the hand.

The matrix camera array on the back gives the HUAWEI Mate 20 Pro a unique, futuristic look. Arranged in a two-by-two matrix, the four cut-outs for the camera and sensors are encircled in polished metal frames, producing an avant-garde look that is both bold and distinct.

dHUAWEI is the 2nd largest smartphone manufacturer in the world, with operations in more than 170 countries. In addition to smartphones, HUAWEI's Consumer offerings include PCs, tablets, wearables and other services. HUAWEI has been operating in Canada since 2008, and currently employs more than 800 people. HUAWEI's Canada Research Centre employs more than 500 engineers and researchers, and is ranked 25th in Canada for R&D investment. HUAWEI is committed to providing leading-edge technology to Canadian operators, customers and consumers.

For regular updates on HUAWEI Canada, follow on social media::