At 9:00 PM (Beijing time) on February 24, Huawei held an online conference unveiling many of the company's upcoming products and broader strategy for the global market, under the theme "TOGETHER Connecting Possibilities". The event showcased such eagerly-anticipated products as the HUAWEI Mate XS and HUAWEI MatePad Pro 5G, and featured a keynote address from Richard Yu, CEO of the Huawei Consumer Business Group. Mr. Yu provided a systematic overview of Huawei's enhanced mobile security and privacy protection framework, and announced the accelerated rollout of Huawei Mobile Services (HMS), an open and uniquely-reliable smart ecosystem designed to meet the diverse needs of Huawei's millions of users in all facets of daily life. The event also indicated that HUAWEI AppGallery, an important component of the HMS ecosystem and the official app distribution platform for Huawei devices, will play an outsized role in 2020, providing users with safer app downloads and unmatched peace of mind. 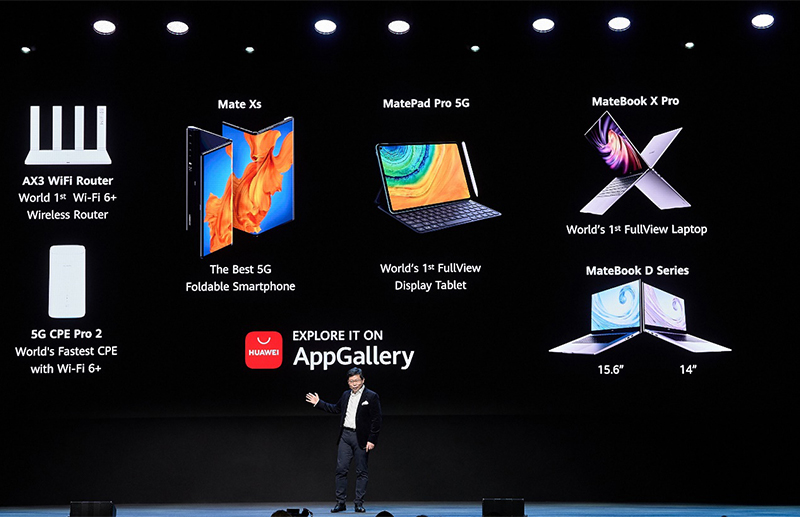 HMS has made a series of significant breakthroughs in app security, cloud data security, and global privacy compliance, as well as in working with and on behalf of global developers, to fully open up its new paradigm of collaborative chip-device-cloud security for the benefit of the public at large. HMS Core represents the realization of this aim, and is a set of revolutionary HMS capabilities that provide developers with the services necessary for creating life-altering apps. HUAWEI AppGallery works hand-in-glove, providing a secure and convenient platform for end users to access the diverse range of apps that were inspired and supported by HMS Core.

In AppGallery, developers are required to complete real name authentication when releasing an app, which means that the developer can be traced when something goes wrong. A unique quad-level security detection mechanism implements four "locks" for app downloads, ensuring optimal security in all scenarios.

AppGallery detects malicious in-app behavior, including such activities as eavesdropping on users, monitoring users, and taking screenshots or screen recordings without authorization. It also conducts privacy disclosure inspections for apps that call, collect or upload sensitive data from users without permission, as well as scans apps for the presence of loopholes, vulnerabilities or backdoors. By integrating intelligent detection methods with manual real name authentication, AppGallery provides for full-fledged coverage that protects users against any conceivable threat.

Every third-party app in AppGallery has undergone rigorous screening, monitoring, certification and re-inspection, a process that successfully identifies and isolates malicious, rogue or Trojan horse apps straight from the source.

Each Huawei smartphone (EMUI 9.0 or later) packs a TEE (Trusted Execution Environment) OS that is based on a self-developed microkernel, the first to be used on a broad commercial scale that adopts proprietary "formal verification" methods for security and trustworthiness. Such microkernel design has obtained the CC EAL5+ certification for global information technology security. TEE OS is capable of isolating and protecting apps within the HMS ecosystem, including in HUAWEI AppGallery, and providing tailored protections for apps that incorporate biometric payment services such as fingerprint or facial recognition. Given the broad capabilities of TEE OS, a wide range of activities fall under its protection, including logging in to a Huawei ID in AppGallery and making payments via Huawei Wallet.

AppGallery itself has been proactive at ensuring that app downloads are optimally secure, with app integrity verification, signature verification, threat detection, AI-enabled safeguards and other measures that prevent malicious tampering. During installation, AppGallery protects app data from being read for nefarious purposes and avoids the irreparable loss caused by user data leakage via such procedures as sandboxing, memory protection, periodic backtesting and customer service feedback.

AppGallery has also implemented an app classification system on a global scale, providing a safe and wholesome app download environment for minors, and introduced a "Child download reminder" function for parents, so that children are free to use Huawei devices without the intrusion of inappropriate or ill-intentioned apps. Thanks to such cutting-edge solutions that deftly manage the hazards of modern life, AppGallery safeguards the interests of users from all age groups and backgrounds.

Huawei Mobile Services has established six regional operations centers and 15 data centers around the world, a massive commitment of resources that indicates a genuine global reach. Furthermore, the HMS global privacy compliance framework fully follows the stringent requirements in both GAPP (Generally Accepted Privacy Principles) and the EU's GDPR, as well as relevant local regulations, in which the data storage location is determined according to the user's region and sensitive data is encrypted. As a result, HMS has passed the strict CSA-STAR security certification in Europe.

In fact, as far back as 2015, HMS had obtained both the ISO/IEC27001 and the previously-noted CSA-STAR security certification. In 2019, HMS garnered the ISO/IEC 27018 privacy standard designation, and was among the first batch of recipients for the ISO/IEC 27701 certification. More recently in January 2020, Huawei ID (EU/EEA) obtained the highly-sought after EuroPriSe privacy certification, further cementing the company's status as a global leader in secure, transparent and compliant user data privacy management.

Huawei Mobile Services is committed to offering secure, reliable products and services that safeguard the interests of its hundreds of millions of users across the globe. It regards consumer privacy as its most sacred responsibility, and pledges to spare no effort in 2020 and beyond, to construct an open, intelligent and reliable ecosystem that serves all of its users. Likewise, HUAWEI AppGallery will work alongside both HMS and the global developers that rely on it, to realize a safe and secure user app experience that is suitable for the 5G era.