Set the Scene with an Amazing Screen

Enjoy every look of HUAWEI MateBook D 15 thanks to the IPS anti-glare 15.6" HUAWEI FullView Display and 16:9 aspect ratio. With Full-HD 1920 x 1080 resolution, and up to 250-nit brightness1, every image bursts with detail and clarity. For a better viewing experience every time you open up.

Beat Back the Bezel

No one wants to look at bezel. That's why the 3-sided bezel around HUAWEI MateBook D 15 is slimmed down to a super-narrow 5.3 mm. More screen, more of what you love to see.

The AMD Ryzen™ 7 5700U processor4 improves overall performance by up to 123%,5 so you spend less time waiting and more time doing. The Radeon™ Graphics sends graphics performance through the roof, making editing videos and photos a much more fluid experience.

Huawei Share6 brings together your MateBook, tablet and phone, creating a connection that allows them to cooperate seamlessly. By taking advantage of the strong suit of each device, you can maximize overall efficiency, and get more things done with ease.

For MateBook and Tablet7

Drawing Pad for Your MateBook/Mirror Mode

Mirror the contents on MateBook to tablet when you need to add a few touch with HUAWEI M-Pencil. Everything will be seamlessly in sync.

Extended Screen for Your MateBook/Extend Mode

The tablet can act as a second screen for your MateBook. For online learning and meetings, you can use your MateBook for display and your tablet for note-taking.

Transfer the documents, photos and videos with a simple drag and drop. The keyboard and mouse of MateBook can be conveniently used for tablet.

For MateBook
and Phone8

Display and run up to 3 phone apps simultaneously on MateBook. Keep your focus on just one screen to seriously boost your productivity levels.

Open and edit files from your phone on MateBook. Any changes made to the files are automatically saved to both devices. Drag-and-drop to transfer files between phone and MateBook.

Receive and make phone calls on MateBook. It allows you to communicate at length with free hands, and video chat with the larger screen.

For MateBook
and Phone8

Display and run up to 3 phone apps simultaneously on MateBook. Keep your focus on just one screen to seriously boost your productivity levels.

Open and edit files from your phone on MateBook. Any changes made to the files are automatically saved to both devices. Drag-and-drop to transfer files between phone and MateBook.

Receive and make phone calls on MateBook. It allows you to communicate at length with free hands, and video chat with the larger screen.

For MateBook and Other Devices

Wirelessly share the MateBook screen to a stunning 28.2-inch display, for a more immersive viewing experience.

Take Charge of
Your Power

The 65 W USB-C charger for HUAWEI MateBook D 15 is compact enough to slip easily into your pocket, while powerful enough to provide 2 hours' MateBook use from a 15-min charge9. The cable provided is USB-C compatible on both ends, allowing fast data transfers on-the-fly, and supporting SuperCharge10 for your phone.

HUAWEI MateBook D 15 rewrites the rule book when it comes to sound. Its custom audio algorithms provide truly pristine surround sound that washes over you like a cool, breath-taking wave. Forget laptop sound, this is MateBook sound. 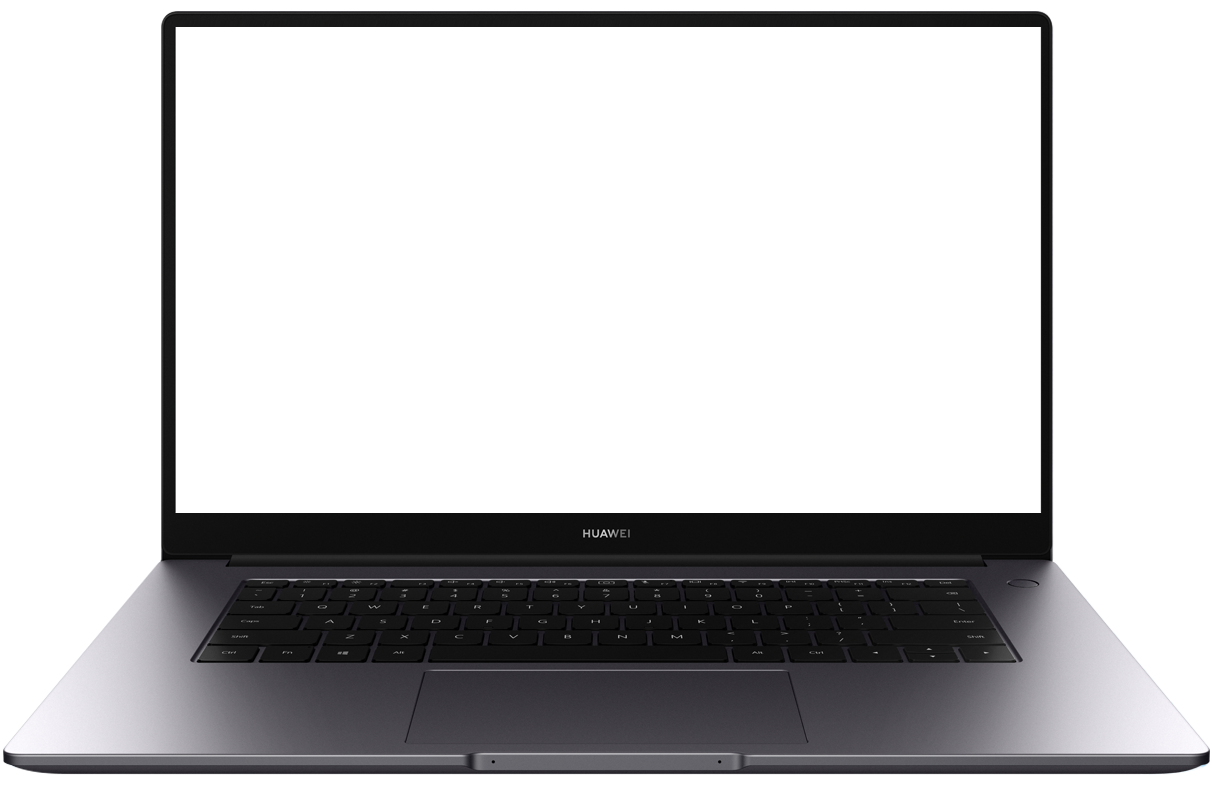 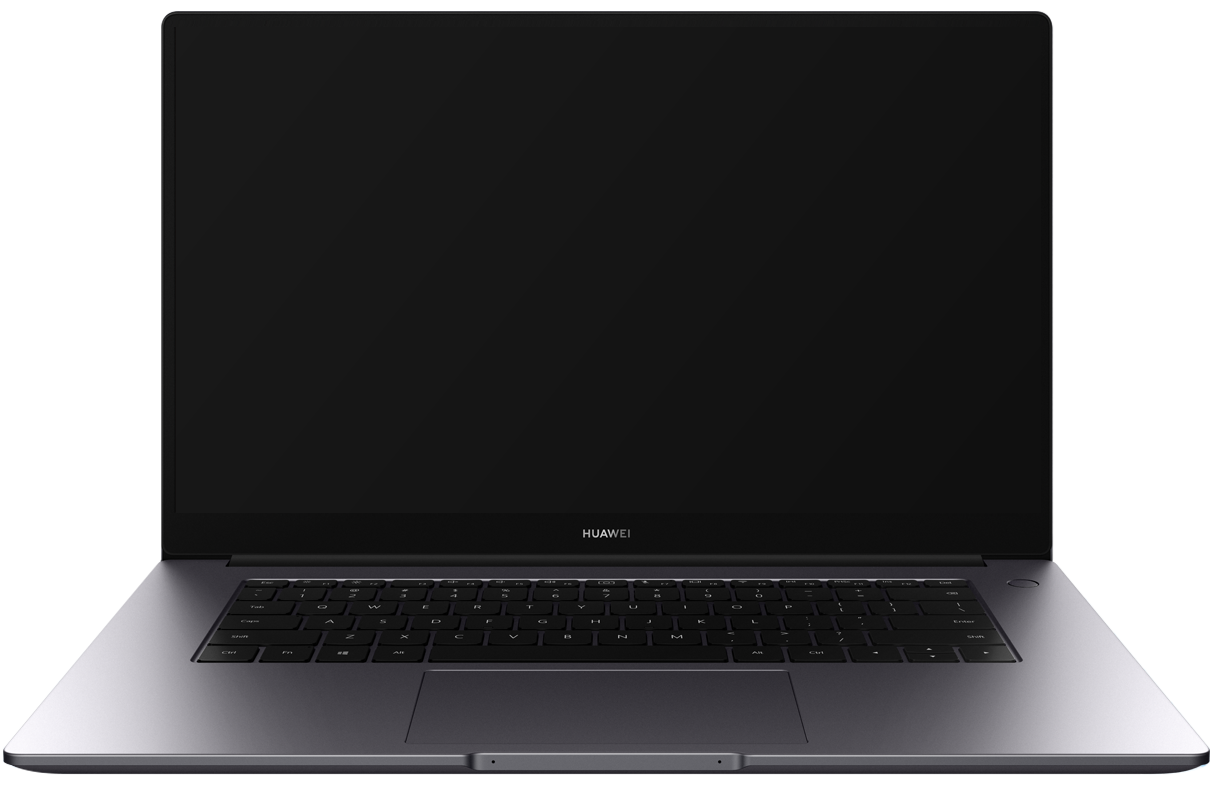 Your finger is your passport to fully access HUAWEI MateBook D 15. Press the Fingerprint Power Button at the top right of the keyboard and it will read your fingerprint, to power on and log you in instantly. The faster and more secure way to start up.

Despite its slim size, HUAWEI MateBook D 15 has the ports you need. You can connect it to a variety of devices — earphones, external hard drive, you name it.

USB-C11
(supports reverse charging, allowing you to charge your devices through the MateBook, even when it's powered off12.)

A formidable 512 GB NVMe PCIe SSD14 reads and writes at a blistering pace, while providing more than enough space for your images, videos, and documents.

When you're working on something that needs that extra power, press Fn + P to switch to Performance Mode15. For everyday tasks, press again to switch back to Standard Mode. Plus, the full-sized backlit keyboard lets you type accurately, even at night.

The camera is innovatively positioned within a key at the top of the keyboard, and only pops up when you press it — putting your privacy at your fingertips.

We put HUAWEI MateBook D 15 through rigorous quality testing and in various situational simulations to ensure stable performance that will endure long-term use.

Back to page top