Apps UP Returns with Over US$1 Million Prize Money

Apps UP Returns with Over US$1 Million Prize Money

On June 24, the Huawei Global App Innovation Contest (Apps UP) 2022, based on the theme "Together We Innovate", was officially launched and open for registration. This contest has been held for two consecutive years and has received nearly 10,000 submissions from almost 10,000 developers, providing a platform for developers to realize their dreams. As in previous years, this year's Apps UP also sets aside rich prizes (more than US$1 million), to encourage app submissions that bring a seamless, digital, and innovative experience to consumers. "This contest is now in its third consecutive year," said Wang Yue, President of Huawei Consumer Cloud Service Application Ecosystem BU, at the competition's launch event, "Huawei hopes to pool the skills of developers from around the world to bring smart apps and experiences across Huawei devices to more consumers worldwide, for a digital future now." 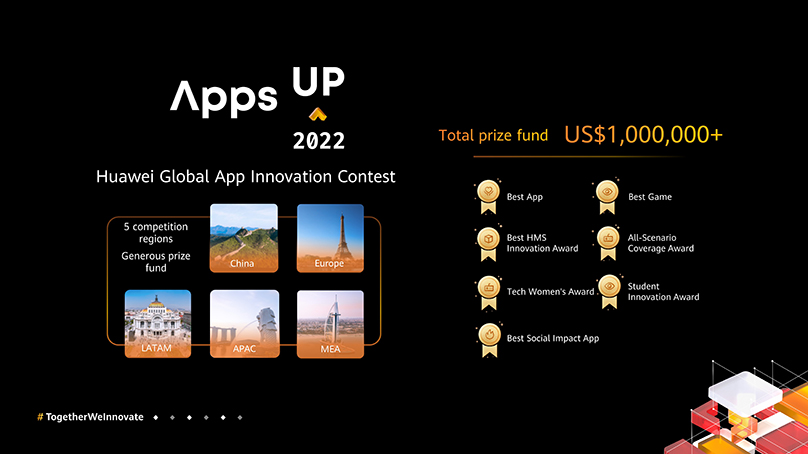 This year's contestants can also get their hands on a range of exciting incentives. A highlight is the serverless service vouchers from AppGallery Connect.

Aligning with its seamless AI life strategy, Huawei has released a number of HMS capabilities that support an array of devices, including mobile phones, tablets, PCs, wearable devices, and IoT devices, continually providing a better AI life experience for users across scenarios. Huawei's HMS ecosystem will continue to empower developers, while Apps UP, as one of the many available platforms for developers to join the HMS ecosystem, will inspire developers to create more groundbreaking AI life apps and services in a number of fields, for a worldwide audience.